Advice about telling your child

The following advice comes from the Donor Conception Network (https://www.dcnetwork.org), a supportive network of more than 2,000 mainly UK based families with children conceived with donated sperm, eggs or embryos, those considering or undergoing donor conception procedures; and donor conceived people. Although we encourage parents to start telling children about donor conception when they are under five, we know that there are many families with older children – sometimes even adults themselves – who have not ‘told’ yet.

Telling children about their origins by donor conception –

Is there a ‘right’ age to start telling?

The goal of early ‘telling’ is that a child should grow up ‘never knowing a time when they didn’t know’ about their origins by donor conception.  In practical terms this means starting the process of sharing information with your child from under the age of five.  Some people like to start talking with their baby – chatting about the donor while changing a nappy is popular.  Others like to settle down and enjoy ordinary family life first and then introduce one of the Our Story books from around 18 months or two years.  A few families wait until their child starts asking about where babies come from at around 4.

What is worth taking into account in deciding when to begin the story is that the earlier you start the easier it is likely to be for you both.  It gives you a chance to practice the language at a time when your baby is not really understanding the words but simply enjoying being talked to.  It also means that once you have started you always have something to build on. If for some reason it has not been possible to start early, then ‘telling’ is possible at any age.  It simply takes more preparation and has to be undertaken as an event rather than a process.

What sort of reaction should we expect?

What matters most to young children is that they have a loving and secure relationship with their parents.  This is what helps them feel good about themselves.  They do not care about genetic connections so when you talk with them about ‘Mummy not having enough eggs so she needed some help from a kind lady’ or ‘Daddy’s sperm not being able to swim fast enough to reach Mummy’s egg’, your child’s response may be indifference, to ask if they can have sausages for tea or to ask what a sperm looks like (most will think they know an egg when they see one).   Each of these and anything else is a completely normal response.

If you are ‘telling’ for the first time when your child is over seven, then it is likely to start with a ‘sitting down and telling event’ rather than a process over the course of several years, although you can prepare the ground by talking about how all families are different and sometimes parents need some help to make a baby.

Children of eight or over have much greater understanding than those under this age.  How they receive the news about being donor conceived is likely to depend as much on how you feel about it and go about telling them as on their own personality and general way of dealing with things.  If they understand immediately – and not all children do make this link at first – that the information means that they do not have a ‘blood’ connection to one or other parent (or both) then there may be an element of shock.  Some children are interested in the science involved in donor conception and particularly IVF.  The older they are the more likely it is that they will be angry at not having been told this information earlier.  Some children are sad for a while that they are not connected by genes and blood to a much-loved parent.  This can also happen in middle childhood as part of the process of integration in children who have been told from a very young age. 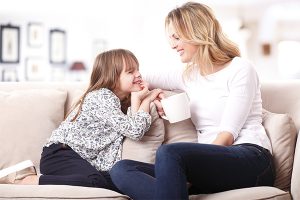 The reference to DNA testing in the section on embryo donation shows just one way in which this technology, now available in kits sent to your home, is changing the do

nor conception world.   Donors can no longer be considered anonymous, whether they started as identifiable or anonymous.  Donor conceived adults are using DNA tests to find genetic relatives, who sometimes need only to have a very remote cousin on the same data-base, for them to be found.  In other cases, further detective work, not necessarily DNA-based, is necessary.  Parents are testing their children and people seeking health information and with no prior knowledge about being donor conceived, are finding that the people they assumed they were biologically linked to, actually are not.  It is a revolution that cannot be ignored.  Being open with children about their beginnings has to be the way to avoid tragic future

family confrontations as well as being in the children’s best interest to know from a young age.

What happens if and when our child starts sharing what we are telling them with others?

Young children rarely talk about donor conception to others, not because it worries them, but because it is of no interest at all.  Even when children are older they often find that other children change the subject because they know nothing about it.

Older children who are comfortable with their origins are well able to correct others when they make wrong assumptions – that a child is adopted, doesn’t have a mother/father or is an orphan.  They may well mention in biology or personal and social education classes that they are donor conceived and this is mostly received simply as factual information.

Confident children whose parents have been open with them from the beginning are well able to combat the rare attempts at teasing or bullying based on their donor conception origins. Sharing information with primary school teachers can be valuable so that they can support and back-up a child who talks about their beginnings in class.  At secondary school stage the information is the childs’ to share, or not, as they choose.

What do donor conceived children and adults think and feel about their origins?

Over the years it has become clear that, apart from personal characteristics like personality and temperament, two things in particular influence donor conceived people’s attitudes to their origins.  The first is the comfort and confidence that their parents had or have in the decision they made to create a family with the help of a donor and second is having information about their beginnings shared with them from an early age.  The second factor is usually linked to the first, in that parents who choose to be open with their children are usually confident about the choices they have made and are happy to share the information with those closest to them, including their children.   The decision not to be open with children and close family is usually based on fears of stigma and rejection by the child and others and it is difficult to have confidence in a form of family creation that leads to such feelings.