Publications on the possible link between caffeine consumption, fertility and miscarriage frequently appear in the news. Despite the media attention regarding the effect of caffeine on fertility, we need to assess the published data carefully. Dr. Christopoulos explains:

What does the available research show?

The first reports on the potential impact of caffeine consumption on fertility date back to the 80s. In 2012, a large, prospective study including more than 3,000 women in Denmark was published. The Danish researchers investigated the link between fertility rates and the consumption of coffee, tea, and carbonate drinks.

This Danish study concluded that:

A systematic review of the best available, research (published in 2017) investigated the potential dose-related effect of caffeine on time to conceive for couples trying to conceive naturally and couples undergoing fertility treatment. The researchers also examined the rate of miscarriage in women consuming various

The reviewers concluded that 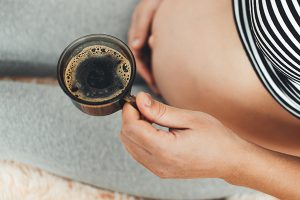 How much caffeine is in my drink?

The following can act as a general guide only. Please read the caffeine intake of your selected drink as they may vary considerably from manufacturer to manufacturer.

For soft and energy drinks:

What do we recommend as specialists?

Based on the current literature, it is sensible to limit your caffeine intake before and during fertility treatment to no more than 100mg. You may wish to switch to decaffeinated drinks and to stop all consumption of energy drinks and soft drinks. Dr. Christopoulos together with our experienced, clinical nutritionist will give you detailed instructions for the period before, during and after fertility treatment.

Please feel free to contact us at info@arkivf.co.uk if you wish to discuss further.